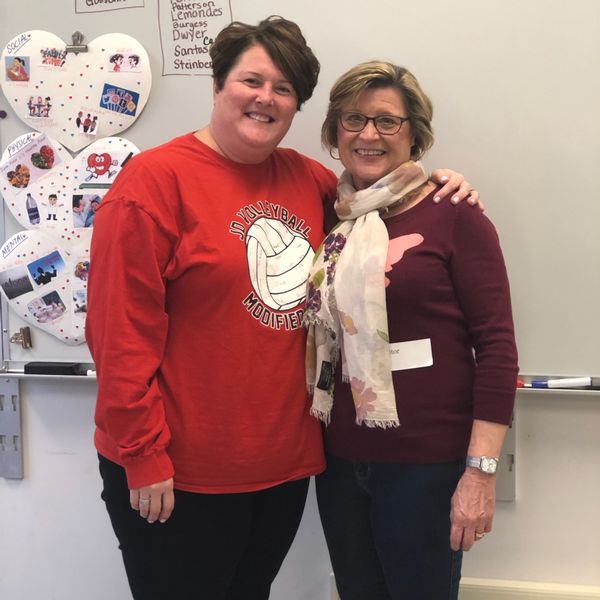 During the week of February 12, Vera House educator Ginger Price spoke to 8th graders at Jamesville-Dewitt Middle School about everything from healthy relationships to consent and victim blaming.

“Step over the line if you like coming to school.”

“Step over the line if you’ve ever felt uncomfortable because of a comment or gesture that someone made about your body.”

“Step over the line if you’ve ever felt embarrassment because someone who you thought was a friend made fun of you.”

“Step over the line if YOU have ever made someone else feel bad by making fun of them.”

“Be honest with yourself,” Ginger said, the teacher nodded to reassure her students that it was alright.

The students looked from side to side, hesitated, before making the decision to step forward or not. After the exercise was over, the students pushed their desks back to the center of the room and debriefed. They said that they felt a little nervous or exposed during the line exercise, but Ginger and the teacher reaffirmed that sometimes we need to feel exposed in order to face hard truths. Exercises like this allow students to think about the consequences of their actions and how to make good choices when it comes to relationships (whether those relationships are social or romantic).

Choices, Choices, Choices
If people believe that violence solves problems, if they believe in rigid gender roles and that someone has to have total control, then people are more likely to choose violence. It is important for young adults to understand the tenets of a healthy relationship and what the warnings signs are for an unhealthy relationship. This is why Vera House is committed to educating the youth of the Syracuse community.

After the students finished debriefing from the “Step over the line” exercise, Ginger asked them to identify flirting behaviors and how those behaviors made them feel. She then asked the class about sexual harassment behaviors.

“There can be a fine line between flirting and sexual harassment,” she told the class.

The group discussed why someone might not come forward about sexual harassment and the students didn’t miss a beat.

“Because the person doing it has power,” one student said.

It is also very important for teens to know that they should not be silent about sexual harassment or assault; that there are people and resources that will support them.

Later in the week, the students sat in pajamas as clouds and rain loomed outside. The discussions deepened to rape and sexual assault. Ginger told the students a story about “Mark and Lisa,” a couple that most would think had a healthy relationship, until Mark forced Lisa to have sex with him after a party, after she said she wasn’t ready. Ginger then asked the students what each person did that made it “their fault.” The exercise was meant to address consent and victim blaming. After the students made a list of Mark and Lisa’s actions, they talked over each reason, one by one.

“Can we blame her just because she wore a sexy outfit?” Ginger asked the class.
The class nodded no.

“Can I erase it?” The class nods yes.

After the exercise was finished, Ginger discussed Vera House services—from counselors to SANE Nurses. She said that sometimes people seek help the day after a sexual assault and sometimes they seek help weeks, month, or even years later. And that’s okay.