What is Rape Culture... 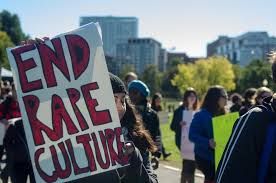 People often ask us what we mean when we talk about the need to change rape culture. Many choose to see sexual assault as the action of an individual outside of any context or they choose to see a context that is inherently discriminatory (e.g. “those people are animals”).

The last few weeks have been filled with headlines that remind us how important a thoughtful examination of rape culture really is. In late June, E. Jean Carroll came forward to publicly accuse President Trump of sexually assaulting her. At Vera House, we always start by believing survivors. We know the President denied the allegations, but in his denial he contributed to rape culture by stating that E. Jean Carroll was “not his type”.  Sexual assault is not about types. Sexual assault is about an abuse of power and using that power to hurt, humiliate and put fear into a vulnerable victim.  When we talk about rape in the context of “being someone’s type”, we deny the reality of rape and contribute to rape culture.

In recent days, we have been subjected to more stories of rape culture in action. Consider the case of Jeffrey Epstein, arrested for sex trafficking, after years of allegations and investigations into sex crimes against underage girls. Epstein’s behavior was well known by many who knew him.  He had relationships with rich and powerful people, including former President Clinton and current President Trump, and he was previously given “the deal of a lifetime” without consulting his victims in a Florida case. The acceptance of the sexual victimization of young girls as Epstein “enjoying his social life” is part of the culture we must change.

Still not sure that we have to address rape culture?  Consider the story about the 16-year-old boy who filmed himself with the caption, “When your first time having sex was rape” and then shared the video widely.

In deciding whether to charge the young man as an adult, a New Jersey Judge in the case denied the motion because, “He’s an Eagle Scout who comes from a ‘good’ family,” noting that “prosecutors should have explained to the girl that pressing charges would destroy the boy’s life.” Thankfully, an appellate court overruled the decision.

What is rape culture? Rape Culture is an environment in which rape is prevalent and in which sexual violence is normalized and excused in the media and popular culture.  It includes blaming the victim, trivializing sexual assault and refusing to take rape accusations seriously.  Please join Vera House in efforts to end rape culture.  #BelieveSurvivors  #StandWithVeraHouse  #SaySomething

This year's theme is "I Ask"

Coronavirus compels men to step up against Domestic and Sexual violence

Coming Together to Help Each Other

We're all in this together

Here's documentation you should keep on file